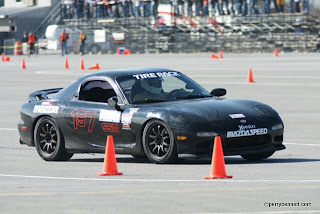 It was 4:30am, I was covered in garage grime from head to toe, and had a meeting for work in less than four hours. I had never felt better! The car was reassembled and the off-season improvements were complete. As an "e-mechanic", this was the longest project in which I had ever entrenched myself. It was rewarding to say the least.

The ambitious goal for 2010 was to build my RX7 for Super Street Mod (SSM) class from it's current state as an ASP car. The rules are very flexible in SSM, but my imagination and innovation is limited. I ended up simply improving on what I had, not yet going for the pre-requisite upgraded turbos and/or motor swaps.

The car diet started with the rear end. A used Greddy titanium catback exhaust, weighing only 7 lbs, replaced the heavier Racing Beat Dual tips, saving approximately 20 lbs. '93 RX7's twenty gallon fuel tanks have notoriously weak baffles and mine broke late last season. To fix this issue a '95+ spec fuel tank, which has reinforced and re-engineered baffling, was installed. This enables the car to be run below a quarter tank without fuel starvation issues. Net fuel weight savings of approximately 60 lbs. To counter all the rear end lightening - and make room for the aforementioned intercooler - the mini Deka battery was relocated from the engine bay to the hatch directly over the rear axles.

Next on the agenda, make it stick so hard that the asphalt rips out of the ground it was laid over. What better place to start than with the tires? Second hand rubber in the form of 295/35/17 Hoosier A6s were snagged up off a corvette owner for a song. These black donuts were shoe horned onto a set of 17x9" wheels that I had laying around. Final fitment was made possible by 0-60 Magazine, thanks to a borrowed fender-roller out of their project car garage, also know as "The Gayrage".

The final stages of the "grip" improvements came from a corner balancing compliments of my '09 National Championship co-driver, and fellow hamfist, Dave Corsaro. The night before leaving for the 2010 Dixie National Tour we put the car on scales at his workplace, Johnson Scale. Not famous for their automotive application, Johnson Scale handles general weighing, force measurement, material testing, and scale inspection, calibration, service and scale rentals. Perhaps they just found a new market niche. By midnight we had the car at a perfect 50:50 cross weight, however not without incident. We spent about 2 hours adjusting perches and deciphering nonsensical corresponding weight changes. It wasn't until Dave scratched his head and murmured with deep concern "I should have been taking better notes" that helping hand Elena discovered our major blunder. The left-rear and right-rear scales were placed at the right-rear and left-rear corners, respectively...

Posted by Hamfist Racing at 3:19 PM No comments: