The old 3 inch exhaust was prone to leaks at almost all the flanges, and despite a highly upgraded cooling system, the RX7 still had heat issues that needed to be addressed. In the never ending battle to chase away rapidly moving molecules of unwanted heat energy away from the sensitive turbo wankle power-plant, the car went back under the trusty knife of Speed1's top fabricator, Jordan.

Armed with various pieces of 4 inch wide exhaust components, Jordan alternated glances between the star-like fire of his welding arc and the schematic exhaust plan devised by yours truly during work hours - everyone at my office assumed the drawing was a plumbing schematic for a work related construction job.

The final product was a masterfully sculpted 4 inch turbo-back exhaust that afforded the ability to swap the axle-back assembly between any combination of muffler, down-turn, and high-flow catalytic converter through the use of v-bands. No more running from Chief of Sound at SCCA Solo Tours and Pros. The car can go from uber-hush sleeper to fire-blowing dragon simply by turning a couple of nuts. Quite possibly the most rewarding function of the end product was that the exhaust no longer leaked! Exhaust leaks were an issue that plagued the old 3" system from the manifold back to the rear axle and constantly left any passenger in a state of despair and disgust - especially in traffic.

The OEM radiator orientation had forced hot air onto every crucial component in the engine, including the intercooler, intake pipes, intake manifolds and turbo to name a few. A "V-Mount" intercooler/radiator assembly is the fix for this oversight by Mazda engineers. Jordan modified the radiator and intercooler orientation with custom brackets, mounts, coolant lines and intercooler pipes. Now the radiator expels heat underneath the car rather than on the intake components and the intercooler can breathe free via an enormous reverse scoop fabricated into the hood.

Sporting a "cooler" setup and an exhaust my leg could pass through, the car was strapped to Speed1's dynojet for a fresh tune. Attempts to regulate boost via the Apexi PFC failed. The boost controller hardware in the PFC has been known to fail so we quickly swapped to a Greddy Profec electronic boost controller, which managed the wastegate function with ease. The car spun the rollers with 370whp at 1 bar of boost pressure. Before we could pour xylol into the gas tank for a high-octane / high-boost (20 psi) dyno pull, the dyno computer crapped out. After repairs were made to the dyno, we returned for the final test and tune, where the car laid down 424whp at high boost. The changes to the set-up from the previous year yielded 40 whp pick up on a Dynojet.

Before finalizing the high boost map, Elena and I tested the car at a Philly SCCA Test & Tune event. Here is a video of my fastest lap that day.

Posted by Hamfist Racing at 4:14 PM No comments:

Why You Should Run The 2012 SCCA Devens Solo National Tour

Registration for the Northeast Solo National Tour event is now open. The event is being hosted by the New England Region at one of the greatest runway sites in the country, Fort Devens, Ayer, MA. Come see where you rank with some of the best in the country. Register now HERE.
Posted by Hamfist Racing at 8:14 PM No comments:

Posted by Hamfist Racing at 7:33 AM No comments:

2012 DC Pro Solo: Kicking off the season at FedEx Field 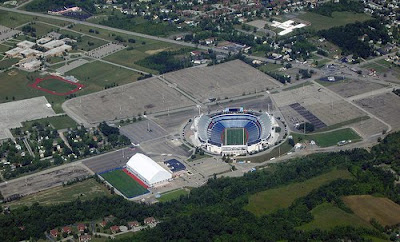 Almost the entire Hamfist Racing crew attended the DC Pro Solo this past weekend. As always, this venue never disappoints. From the drag start on the hill, to the heavy off-camber turns, combined with different levels of grip throughout... it's quite the challenge and worth every waking second to be a part of.

Road Tire classes were the very first cars on course. Thankfully, everyone gets four morning runs and four afternoon runs so any advantage or disadvantage is basically negated at the end of the day on Saturday. Same can't be said for Sunday though.

RT classes are lumped together for Pro Solo competition this year. What this means is that RTA(all-wheel-drive), RTR(rear-wheel-drive) and RTF(front-wheel-drive) cars use their respective Stock class PAX index to determine the finishing order. In my opinion, I do not think it is fair for all-wheel-drive cars to compete against the other drivelines in a Pro Solo format, especially at DC. It was an up-hill battle(sorry I had to) for anything not spinning all four wheels at the start.

I ran pretty well on my first four runs and waited in impound for the co-drivers to finish their runs. I enjoyed an early lead in the morning but that quickly disappeared, and had me instead trying to catch a 2011 WRX all weekend in PAX. Looking over that pesky Subaru in impound I noticed that they were using 265mm wide Dunlop Star Specs on an 8" wheel.

Since these new RT classes have a lot of unknowns as to what tire sizes are optimal on whatever sized wheels, no one really knows just how big is too big. I immediately thought to myself " I am buying new, wider tires as soon as I get home", as I still had last year's 245mm Star Specs on my car. I ended up finishing second out of twelve in class, just behind Andrew Barrette who took first place driving Ken Johnson's Subaru.
That's the last time I show up with stock struts/shocks and old rubber.

I would also like to thank Steven J. Farkas, owner of SJF Performance, for the perfect alignment. Not only was it spot on, but I also picked up 2mpg having the wheels pointed straight this year as I don't believe rear toe out is needed with street tires, yet.

Jake finished first in SSM driving the RX7 and went to the second round in the Super Challenge. Jake is currently looking to Home Depot for sponsorship as he just loves that store and the color orange to boot.

Grant and Rob took the Boss Miata to second and fouth place finishes in E Stock. They are definitely a force to be reckoned with this year as they appear to have just the right amount of wedge dialed in now.

Master Yury battled his way nicely in STU and finished third, just over a half second out of first. I asked Yury about his lunches(no that's not misspelled) over the weekend and he said they felt good. I am trying like hell to get him to go to more events!! :-)

Elena™(Tiny Muscles) wheeled her way to a sixth place in a very tough Ladies 1 class.
I would like to see her get her milkshake eventually as Chick-Fil-A dissed her on Friday. You don't mess with a woman piloting a 425whp RX7. You just don't.

I also would like to congratulate our neighboring Philly region member Mike Fineberg for winning the Super Challenge at the 2012 DC Pro Solo this weekend! That is no small feat, as he bested several National Champions on his way to the top. Way to go Mike!
Here is a video of his winning runs: CLICK HERE
Like every other event we go to there are soooo many laughs and good times we will always cherish. I already can't wait for the next one!!
Posted by Hamfist Racing at 9:58 PM No comments: 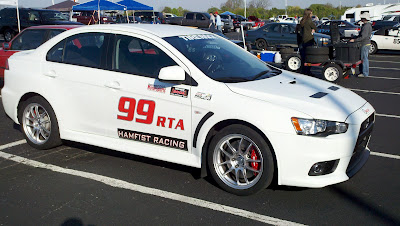 For years, SCCA members have voiced their opinions regarding tire allowances in Stock classes. Most of the grumblings stem mainly from those who are just fed up using expensive rubber with a short competitive lifespan on cars with the least allowances in Solo. I emphasize 'competitive' because the window for peak grip is very early and narrow in the life of a typical R-compound autocross tire.

While I do not support removing R-compound tires from Stock classes(that is way worse than upsetting the apple cart... more like setting the orchard on fire), I do feel that the Club should provide an outlet for those who need their concerns addressed. It's by far not a perfect solution, but at least one the SCCA can hone in on and gauge the direction it needs to go in order to keep members happy and most importantly, generate new memberships.

The new classes are as follows:

I will be supporting two of those classes this season using my 2010 Mitsubishi Evo X SE in RTA, as well as my 2012 Toyota Yaris SE in RTF.

Thanks Park It Management!

By: Jake
The team at Hamfist Racing appreciates all of it's sponsor support. We would like to take a moment to recognize Park It Management for their continued support in 2012. Park It Management is a locally-owned and operated business that has been parking cars throughout the Metro New York Area for more than forty years. They are real New Yorkers...not a national chain. They train and employ local residents to provide the highest level of professionalism and customer service for our many parking lots and garages. At Park It garages, they treat all customer's cars as if their garages led directly into their own driveway.With multiple locations in Manhattan and elsewhere, we are able to accommodate your special needs:
* Long-term storage of iconic vehicles
* Special-events parking
* Photo and Film Shoots

Here is a list of their locations. Please support garages that support Hamfist Racing!

Posted by Hamfist Racing at 12:19 PM No comments: