Posted by Hamfist Racing at 8:48 PM No comments:

Do You Need Help Getting Psyched For The Solo National Championships?

Of course not! But to fuel the fire watch these... 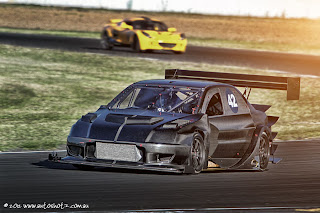 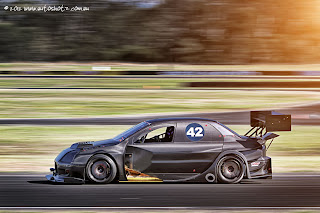 During the first day of action at the World Time Attack in Sydney Austrailia, the Nemo Racing Mitsubishi Evolution IX seems to be running away with the event. The car blasted a 1:25.74 second lap, more than three seconds faster than the previous record holder and world champion, Tarzan Yamada and the Cyber Evo. The 900 all-wheel horsepower Nemo Racing Evo is playing in it's backyard representing the Austrian contingent at the event. Appearing more like a fish than a car, the Nemo Racing Evo (appropriately named car, possibly after Nemo the animated fish) is the most radical time attack car Hamfist Racing has ever seen. By tomorrow a champion will be crowned. Our money is on Nemo.
Posted by Hamfist Racing at 12:56 PM 1 comment:

Driver, Jake, and the Hamfist Racing SSM Mazda RX7 are caught in a story on www.AutomobileMag.com about the new Subaru BRZ coupe. 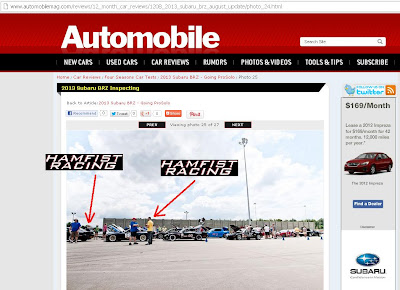 Posted by Hamfist Racing at 9:19 PM No comments:

At the Toledo Express Airport traction was high but emotions were even higher. After years of preparation, the Hamfist Racing Super Street Modified (SSM) RX7 was ready to be pitted against the High Pressure Performance RX7 of the Thompson family at the 2012 Toledo ProSolo. Many believe the Thompson's RX7 is the most highly developed SSM car in the country. They would be right to think so. Their RX7 had been dominating SSM competition across the country during the 2012 Solo National Tour and ProSolo series. Carter Thompson has tallied multiple wins over Erik Strelnieks' 3-Rotor, three time SSM national championship, Jungle Cat Racing RX7. With Carter's track record, my goal going into the event was to just keep up. The anxiety reached a paramount as SSM drivers approached the start line for competition Friday. I was excited, yet fearful, to see how the car would shake out in comparison to the Thompsons' creation.

At the start of competition Friday, adrenaline built up so strongly in my body that I proceeded to jump the lights and get disqualified for three of my four runs, putting the car in last place. The raw times were suppressed in the results, which merely displayed "RL" indicating the disqualification from a red-light start.

The next morning the competitors conceded they dug through the raw data online and found my times were at the top of the class. My confidence was buoyed by my scratch time performance from the previous day. With dwindling anxiety and increased familiarity with the start line traction, I was able to blast out of the hole with green lights laying down lap after lap of blisteringly fast times. One lap, most notably, was into the 26.XXX second realm which raised eyebrows across the event. This performance on day two posted me solidly in first place over Carter Thompson, Brian Johns (former ES National Champion), and Dan Chadwick (RX7 guru and 2009 SSM National Champion).
The day was a success but tomorrow I would need to improve lap times further to lock in the win. Later that afternoon I received a call from my family with heart sinking news that my grandfather passed away. He led a long life, raised a great family - including my mom and two twin aunts - and pursued his dream, successfully becoming a professional artist and illustrator. I will miss him and my grandmother greatly.

For most of the weekend, I was able to keep my family in my thoughts. However any autocross racer can tell you, the moment the clutch is released going into a sea of cones, there is only one clear and concise goal dominating every action in your body and ounce of concentration in your mind. That goal is driving perfection. It is this surreal experience of absolute concentration and physical precision that motivates racers to continue in this sport. Life may be scary, sad or confusing at times. For a racer, driving is an escape, a meditation, a moment of clarity.

At the starting line Sunday for final SSM class competition runs, the tree began flashing... Yellow. Yellow. With that second yellow flash of light, my minded raced with compassion and grief towards the loss and pain in my family. Yellow. By the third and final yellow my mind went completely blank. My right foot pushed the gas pedal to the floor-pan and my left foot lifted off the clutch towards to the sky! The rotary powered Mazda tore off the starting line with the fury and power of my entire emotional state. I was able to pull off the ultimate class win with dueling 26 second lap times on both left and right courses.

Below is the uStream video from Sunday Heat 3 competition runs. The action between Carter and I begins at the 1:25:00 mark
.

Posted by Hamfist Racing at 8:44 PM No comments:

The front right wheel lifts substantially around the 1:23 second mark in the video. The Hamfist Racing SSM Mazda RX7 finished 1st Place in class by over 5 seconds at this event!
Posted by Hamfist Racing at 7:38 PM No comments: