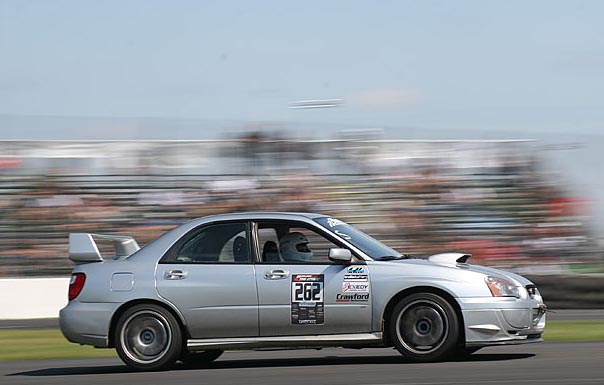 Hamfist Racing driver Brian Goldstein has been under the radar for years on the racing scene. He is always just out to have fun. He doesn't run the national level autocross races, but when he races he destroys any cometition in his path. Greatly influenced by the drift culture and the recent Ken Block gymkhana videos, Brian has always had a penchant for driving sideways. However he doesn't compromise his speed like a lot of Formula D fanboys. So, in his search for the marriage of drifting AND speed, he explored new varieties of motorsports.

In the 08/09 winter Brian discovered Monticello Motor Club's winter driving series. The event was a "balls out" time trail rally on the private Monticello Motor Club racing circuit blanketed in ice and snow. The venue finally afforded him a place to showcase the speed in drifting his 2004 Subaru Impreza WRX STi. The first event Brian ran on all-season tires to get acquainted with the Ice-Age-like conditions. But it didn't take long to realize he was competing on the wrong rubber. By the second event, Brian had picked up a fresh set of dedicated snow tires and took to the rally race once again. The improvement was extraordinary. He was able to blast through every turn at full opposite lock with total control and lots of speed. The end result was an overall 1st Place - Fastest Time of Day. Check out the video below!

Monticello Motor Club disappointed the rally community over the 09/10 winter season by discontinuing the Winter Driving Series time trial races. Frustrated that he couldn't continue showcasing his drift skills in the snow, Brian began looking elsewhere. The drift scene was too much about show and not enough about being fast. Autox after autox you could hear Brian asking course designers to implement gymkhana elements and 360* turns around single cones. Finally, his requests were heard... sort of. NOPI and Hot Import Nights hosted a Gymkhana competition at Englishtown Raceway Park. Brian once again failed to disappoint, executing drifts and rotation far better than the rear-wheel-drive machinery in the mix. The spectators loved it! Check out the video below of his last run. Half way through the run the car fuel starved and turned off. I suspect that run would have been FTD if the fuel pump didn't start sucking air.

What sideways action will Brian get into next? Time will tell. But I suspect he is already having fun with his new RWD daily driver Miata in the secluded roads of some backwoods NY State Park.

Posted by Hamfist Racing at 9:07 AM