SCCA DC ProSolo is in less than two weeks and Finger Lakes National Tour is this week. For many, Team Hamfist included, preparation is in full swing – preparation of equipment and preparation of drivers. Aside from making sure we get seat time every chance we get, including this weekend's NNJR SCCA autocross on the Raceway Park road course and last weekends 2-day Holbert Memorial, we have all begun working on some minor tweaks to get the cars closer to the maximum performance potential of each of our classes.

I am not about to let those STU boys get the best of me. For me personally, that meant spending a little time wrenching and a little time running erands. Neither of which was uneventful. 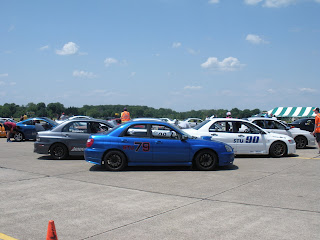 The STU Competition
A week or so ago myself and a couple other Hamfists decided to pull the trigger on new rubber. Between all of us we ended up buying twelve new tires; including, 4 Dunlop Direzza Z1 Star Specs, 4 Toyo R888s, and 4 Hoosier A6s… drool. The Hoosier A6’s are 275/35/15 and are set to be run on the La Rosa’s 1993 Mazda RX7 R1 – an ex-Super-Stock car now nicely prepared for ASP competition. 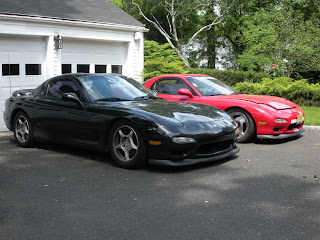 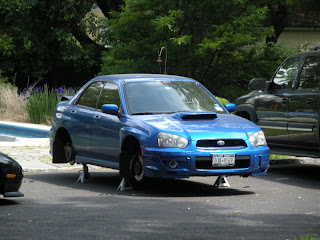 The R888 rubber, while sticky and technically and R compound tire, is more of a compromise between street and race. This rubber has been mounted to an A-Stock 2008 Honda S2000 Club Racing Edition owned by Hamfist co-founder, Dave Corsaro. (There will be much more on both of these autox beasts-drivers and cars-in future posts here so be sure to check back.) 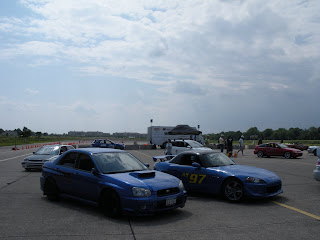 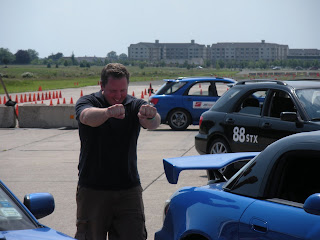 Co-founder Dave performing the official Hamfist salute
The Dunlop’s are for the Subaru STi. Dunlop Direzzas are one of the fastest tires available for ST* competition in SCCA solo racing. Despite the Bridgestone RE11R being the tire of choice for most of my divisional and regional competition I decided to stick with a tried and true tire. This decision unfortunately eliminates me from contingency sponsor prize eligibility with Bridgestone, obviously. However, the upfront cost was a couple hundred dollars less buying the Dunlops than buying the Bridgestones.
Our Hamfist fieldtrip to Wal-Mart for a low buck race tire mount ($3.50/tire) yielded some funny pictures. One of which is the Bronco full of wheels and tires, sixteen to be exact. 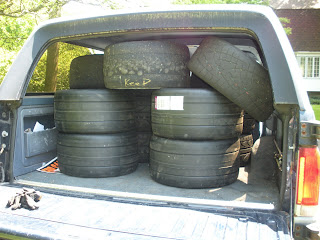 And a business was born... Acme Tire Transport Co.
I guess that old hunk of steel serves a purpose after all. The other interesting thing to note was the car-nage that occurred right before our eyes upon pulling into the Wal-Mart parking lot. A Honda Accord came barreling out if its parking spot over a mulch median and plowed into the side of a shiny Civic parked 30 feet away. I thought that the throttle might have gotten stuck on the Accord, that was until the Accord backed up 10 feet and threw the car back in drive for another crunch session. Repeat. This guy was obviously nuts! 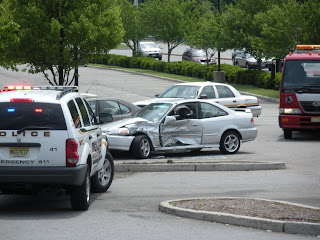 Wal-Mart carnage aftermath
We hamfisted the Bronco out of there in fear of being the next target on this guy’s rampage. Once the heat died down we check back with the scene of the crime and snapped pictures of some of the aftermath. Apparently the driver had a stroke and was clueless as to the carnage he was causing. He ended up in a telephone poll separating the parking lot from the major road. Lucky he didn’t cross over.

Back at Wal-Mart the tire mounting grease monkey decided to hook me up with a custom "polished lip" on one of my Rota DPT bronze wheels. What do you expect for $3.50 per tire? Team Hamfist is sitting on fresh rubber, now.
(Picture soon to come)
After the Holbert weekend and NNJR autox passed I started looking around at some parts I have accumulated over many months that I have yet to install due to a severe case of procrastination. 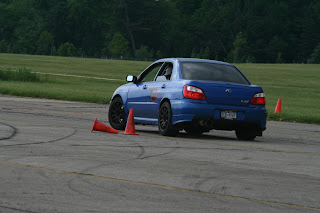 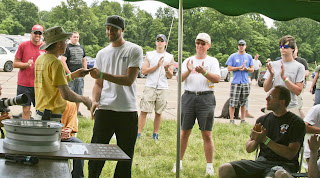 Custom Meineke Dump Pipe
Additionally I have been piecing together some stock parts that have broken or fallen off, possibly as a result of rallyx, including a turbo heat shield bracket and a front passenger side fender liner. Most of this gear went in without a problem. However, while swapping the spark plugs I needed to remove the airbox; at which time I discovered that my K&N panel air filter was 95% caked in rally mud. When I say caked I mean CAKED. It looked like I baked a cake out of mud on the dirty side of the filter. 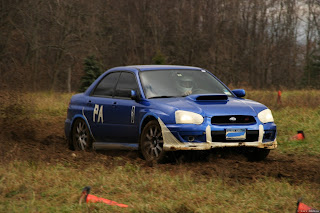 Source of the mud pie - Poughkeepsie Sports Car Club Rallycross '08 (Photo By: Robert Plafta)
They only part of the filter that looked to be allowing air to pass through must have been no bigger than a Ritz cracker. I have been autoxing like this all season! I proceeded to wack the panel against the ground ten or so times and it was all clean... relatively speaking. In my last effort to shave every tenth off my time and every ounce off my car I removed my rally armor mudflaps and rear aero-skirts. Not only does all this cosmetic hardware weight critical ounces but I imagine that they protruded off the car sufficient enough to clip unnecessary cones.

Next on the agenda is a stop at Sunoco for 5 gallons of my favorite automotive beverage, GT100 octane, and then I am off to Finger Lakes. Team Hamfist, I'll see you there. In the meantime don't forgot the secret Hamfist mantra... "Balls To The Wall."

Posted by Hamfist Racing at 1:07 AM