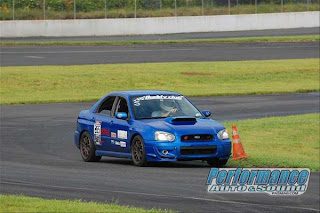 We received this writeup from Jake, driver of the Hamfist Racing Subaru STI, and want to share it with all of you!

No Risk, No Reward… By: Jake
It was mere days before I needed to head out to Lincoln, NE for the SCCA Solo National Championships and Redline Time Attack was gearing up for a weekend of grassroots time trial battles at my local track. How could I resist.
For me, the deciding factors were contingent on a few things: cash prize money, weather, and my willingness to risk my car’s well being (track flogging can cause mechanical problems, in case you weren’t aware) the weekend before the SCCA ProSolo Finale and Solo National Championships. Scanning over RedlineTimeAttack.com I realized there were several companies offering cash prizes for top finishers. Most notably Subaru was offering up to $500. Money, check. Weather forecast called for mostly clear skies Sunday, race day. Weather, check. Lastly, I figured that if I drove conservatively the car would be fine. Naiveté, check.
I was determined to retaliate against all the Street class drivers from last year’s Redline Time Attack season finale at Round 6 of the 2009 Redline Time Attack series. Doug Wind’s Mopar/Continental Tire SRT4, Alex Sharanevych’s Slick Motorsport EVO and Thomas Hiromoto‘s Fuji Racing Miata all had huge targets on their backs. Now, with the support of team Hamfist Racing, I was aiming for a bull’s eye.
Since the '08 Redline season finale my Hamfist Racing Subaru STI has received a proper H&R coilover suspension, dialed in with additional camber, wider wheels and the almightily Dunlop Direzza Z1 Star Specs… the perfect ammunition for time attack annihilation. Also, another similarly prepared STI, driven by local autocrosser Brian Goldstein, joined team Hamfist Racing for the massacre. There was just one problem... Turn In Concept's (TIC) and their new hot shoe – One Lap of America class champion Tony Weisenhahn. The TIC crew has campaigned a highly tuned Subaru WRX at all the east coast and mid-America Redline Time Attacks this season. The car pumps out close to 400whp on a 2.5L block; amped up by a GT30 turbo and fortified with forged internals. Because the car is straight out of Turn In Concept’s garage, you better believe the sucker can grip – running none other than Dunlops in the maximum allowable width of 255mm (10mm wider than my STU spec Dunlops), TIC/AST coilovers, and just about every other TIC bushing and suspension component they have on the market. 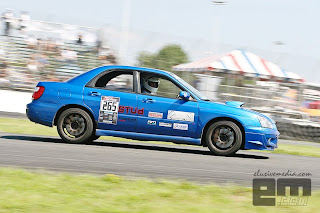 Team Hamfist Racing was running late Sunday morning and both the cars and drivers were running on empty. Trying to maximize our course time we jumped into the practice session, regardless – even managed to forget installing our transponders before heading out. The sun had not fully dried the course from the previous day’s storm so these runs were taken at 60 percent. Between the wet conditions and the heavy on course traffic we were only able to push hard on our last few laps. We both found we were getting fuel slosh starvation issues on the second fastest part of the course (at turn 6 on the not-so-accurate track map).

With only a short 30 minutes between warm up sessions we booked it to the nearest Exxon for a full tank of gas and grub. The brimming tank fixed the fuel starve issues and this time we remembered to pick up our transponders. We jumped in the front of the pack from the get go and got a clean run or two before hitting the L.I.E. rush hour traffic. Regardless, one of the clean runs was good enough for me to qualify 3rd out of the twenty-four Street class drivers. At this point it was clear I was going to edge out all of last year's competition. The two Street class drivers who out qualified me were the TIC Subaru WRX and the Draco Performance Subaru STI. As a result, I am sent out after the Draco Performance Subaru on our first official time attack session. Holding nothing back I pushed my heat cycled Dunlops until they could take no more. The tight 180 degree turn around on the far side of the course really helped open my eyes to the worn nature of my tires. The car pushed and wouldn’t turn in the tight corners. Understeer was apparent and I realized the next time attack session I would need to put on my fresh set of SCCA Solo National Championship tires, also Dunlop Z1 Star Specs. 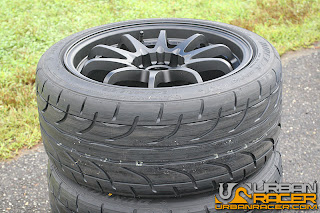 Regardless of the worn rubber, I edged out the Draco Subaru STI and maintained the lead over the Mopar SRT4, Fuji Racing Miata, and Slick Motorsports EVO with a 1:15.0XX second lap time. TIC continued to dominate and held a two second margin over the field. Brian and his Hamfist Racing Subaru STI also performed well in the first session running a 1:15.XXX and sitting just outside the final trophy spot. For the next and last practice session I still had not swapped rubber. Naturally, my practice time matched my time attack run nearly identically. Brian however showed some significant improvement, nipping away at my comfort zone. Once the session was over I had 30 minutes to swap rubber and get in grid for the final time attack session. The street class drivers took notice upon unveiling the fresh rubber nestled under the seamlessly harmless blue tarp. The Dunlops were shaved to 6/32”, mounted to a brand new set of 17x9” Rota DPT’s and ready to grip the road like a fat kid holding a candy bar.
Released behind Tony in the TIC Subaru I went out for half a lap of tire scrubbing and left foot braking before going all out for the top spot. With the tires scrubbed and brakes warmed up, I headed into the main straight right before the timing equipment with the intent of tripping the start line with as much speed as possible. But at the end of the straight Tony slammed his brakes nearly parking his car at the timing equipment, his arms flailing wildly out the side of the car. I was confused and was forced to slow down. Tony continued his run awkwardly and because of his random braking frenzy I was right on his tail the entire session. On my last lap fuel level got so low the car began to starve again on the long right-hander. Needless to say my session was seriously compromised.
When we pulled into the pits Tony was obviously very upset. He proceeded to explain that there was a pylon on the main straight toppled over lying directly in his racing line. Now that he mentioned it, I do recall instinctively driving around the pylon on the straight like a good autocrosser. Tony made a very valid point that safety should always be the number one concern on track and the pylon was certainly a hazard. As it turned out the pylon was there for most of the Street class drivers and anyone affected by it was welcome back for a repeat final time attack session. Naturally the top 5 street class cars, Brian and I included, opted to hit the track for a pylon-less session.
I scrambled for gas in the paddock and found team WDS willing to sell me 5 gallons of my favorite go juice, Sunoco GT100, in time for the repeat session. Back out on track everything went smooth and safe. I continued to push harder and brake later. Apparently I wasn’t the only one pushing since 4 out of 5 drivers who opted for the session improved. Fortunately I managed to hold on to second place over the Draco Performance Subaru STI by a 0.074 second margin. TIC took first in Street class by 1.741 seconds, the smallest margin out of any Redline events at which they competed. Unfortunately, Brian suffered from fuel starve and a smoking hot turbo in the final session and had to park it off course until the session was over. He still managed to secure 5th place in Street-AWD with a 1:15.086 lap time. My best lap clocked in at a scorching 1:14.384.
At the conclusion of the time attack we check in on long-time-autocrosser-turned-time-attack-hot-shoe, Mark Daddio, to see how his day closed out. He had lapped the AMS/NOS Mitsubishi EVO X at a blistering 1:07.222 seconds despite power steering issues. Mark is an incredible driver and continues to impress at every event he drives for AMS. He commented on how fast I was in an STU prepped car and congratulated me on the podium finish. He then asked, “Is that the car you plan to run at the SCCA Solo National Championships next week?” “Yeah. Why?” I replied. “You’re CRAZY!” he insisted. Mark Daddio is the kind of guy who understands the importance of maintaining a national championship car (being a multi-national solo champion).
One recurring theme I’ve notice throughout interactions with top drivers in the country is that rarely does anyone understand the importance of maintaining the hamfist mentality. Without this critical personality trait Team Hamfist would just be another group of weenies wondering, “What if?” I say, “Whatever”. I didn’t break the car and I was off to Nebraska two days later for the SCCA ProSolo Finale and Solo National Championships.
E-Town Old Bridge Township Raceway - Round 6 - Results
E-Town: A Racer's Perspective
Posted by Hamfist Racing at 7:46 AM