From The Lincoln Tunnel to Lincoln Nebraska

The journey to Lincoln Nebraska started out with a circus of undercover NYPD officers swarming my vehicle within half a block of my apartment. I knew it was a bad idea to leave the exhaust dump and those damn Redline Time Attack decals on the car. There I was, sitting in a flashy, sticker ridden race car
--> with a matchbox spoiler on my trunk, surrounded by fifteen plain clothed undercover NYPD officers with shields dangling from their necks. The traffic stop was a hell of a spectacle for the hundreds of New York City passers-by. 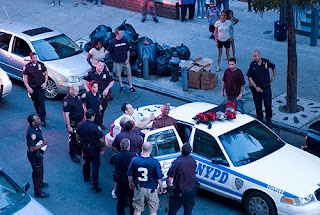 It was nearly an hour until they sent me on my way with a measly traffic violation (no massive drug bust here, sorry folks). I guess the undercover detectives were not very familiar with the practices of cutting traffic tickets. As it turned out, I allegedly honked my horn without any clear sign of danger. We were in Manhattan for Christ’s sake, who doesn’t honk their horn? That battle would have to wait for another day; I had a more important one waiting for me in Nebraska. It was peddle to the metal out of the Lincoln Tunnel on a mission to a new Lincoln. 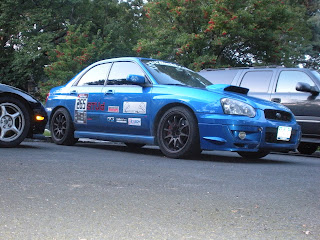 Hamfist Racing Subaru Begging for Unwanted Attention
After about fifteen hours of driving I was in the middle of nowhere and getting restless. A quick glance at the GPS showed I was approaching the Mississippi River. If there was one thing I learned throughout the many years I was forced to take social studies in grade school, it’s that civilization cultivates around water. There was bound to be something along the river to do or see. I discovered downtown Moline, IL and in this city there was a hair salon... two actually. At that point I had grown an incredibly grizzly beard and a Jew-fro that rivaled Seth Rogen. I sat my ass down for a relaxing professional grooming - my first paid haircut in nearly 10 years - to take my mind off the fact that I still needed to drive another 12 hours. Despite being in Bumble-Guam, Illinois the two hair stylists were really cool. Without second guessing my directions – or mental state – they carved the mysterious pylon into my head. 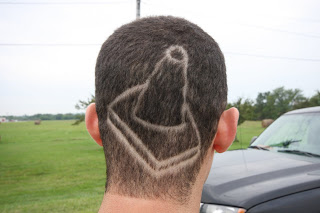 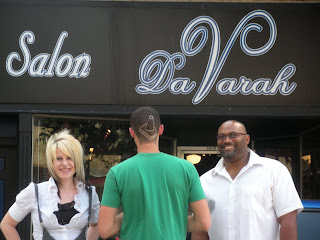 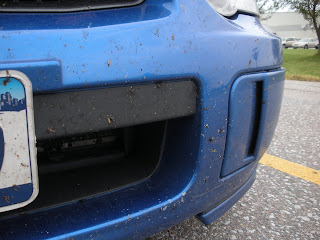 1300 Miles Worth Of Insecticide On The Street Driven Hamfist Racing STU Impreza
Upon arriving in Lincoln I could see the racers in attendance were the best of the best from the 2009 ProSolo series. A win in Lincoln, I realized, was going to take perfection. Expecting my Subaru to understeer on concrete, I decided several test and tune runs would be necessary to obtain that perfection. Since the car has non adjustable shocks I jacked up the rear pressure to astronomical levels in an attempt to induce oversteer. The concrete was too grippy for that trick, so I had to rely on alignment adjustments, which I have not played with all season, to get the car to rotate at corner entry. Corey Ridgick – driving the Bridgestone Mitsubishi Evolution in STU – helped decipher my rear toe adjusters, and Max Hayter – driving the ChaseCam/Fordhal Motorsports Subaru STi in STU – let me borrow his set of Longacre toe plates, to achieve a slight rear toe-out alignment, effectively dialing out the terminal understeer that plagued my car on concrete. Thanks guys! 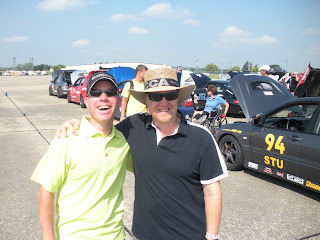 2007 & 2009 ProSolo STU Champion Ridgick (left) and 2008 ProSolo STU Champion Max Hayter (right)
Day 1 of ProSolo competition started out well. On the left course I was chipping away at the clock with some solid runs and respectable times. On the right course, however, I felt off the mark having gone too deep into the braking zone after the far right slalom. Despite imperfection I was sitting behind Geoff Clark in second place going into the afternoon runs. In the afternoon it got hairy. I red lit after psyching myself out thinking I needed a solid improvement on the right course. With that red light still etched into my retinas I must have overlooked a wall of three slalom cones. Swinging around for what would be my last run of day one I shook off the cobwebs and yelled at myself to look ahead. With the announcer calling out all sorts of action at the top of STU, I tried my best to concentrate. On the right I pulled out a three tenths improvement moving me ahead of Clark, but it wasn’t enough. Both Ridgick and Hayter edged me out and I was sitting in third place, 0.517 seconds from first. 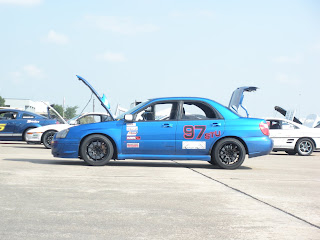 Hamfist Racing Subaru STI in all its impound glory
The spread to first was within reach but I knew Ridgick wasn’t going to give it up without a fight. Sure enough, on day 2 he improved by eight tenths. I simply needed to go faster… and I did, improving run after run with a near 6 tenths pick up on the left and almost a full second on the right! I stormed ahead of Ridgick and Hayter and ultimately secured my first ProSolo victory.
The win felt fantastic but at the same time bittersweet. All season I’ve been chasing one driver: Corey Ridgick. Every event I would get closer and closer to victory until I finally began to drive faster than him. The times I was faster, however, were always on one course out of two course events (National Tour or Prosolo format events). He would best me on the other course, by a greater margin, ultimately winning the event. I always “won the battle but lost the war.” This included finishes at DC ProSolo, Finger Lakes National Tour, Northeast Divisional Championship, and the Holbert Memorial. 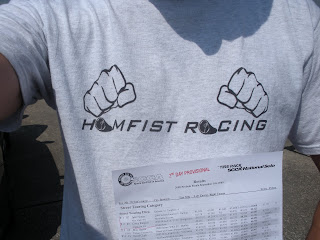 The Provisional Hamfist Racing Win
After finally driving faster than Corey on both courses and securing the event win at the ProSolo Finale, Ridgick once again managed to edge me out and win the war. I finished 2nd place in the overall season points championship and Ridgick secured the 2009 ProSolo Season Championship. Congratulations!
Corey deserves the season championship. He was nearly perfect every second of every course of every event all season. That’s what it takes to win this game. I still wake up covered in sweat thinking about the 0.001 second differential from DC ProSolo and how things could have ended differently. I swear to the world, next year I will hamfist my way to perfection and to a ProSolo Championship. No more f’in What Ifs.
2009 ProSolo Season Finale Results
2009 ProSolo Championship Points Standing
Posted by Hamfist Racing at 9:13 PM